The Middle East is a tinderbox – Syrians being massacred by chemical weapons, Egypt in continuous turmoil, Lebanon being torn open by old and new wounds, not to mention Iraq, Tunisia, Yemen, and Libya enduring a chronic state of flux.  This is the Arab world my husband, Bishara, and I were returning to after an extended peaceful and restful summer vacation in the U.S.  Just five weeks earlier I had felt wistful about leaving Qatar for America; I would miss meandering along the alleyways of Souk Al-Waqif, walks along the Arabian Gulf, gatherings with Qatari and expatriate friends, and our two miniature poodle pups who would be staying behind with friends.  I was a happy and content expatriate living a full and comfortable life in the tiny nation-state of Qatar. 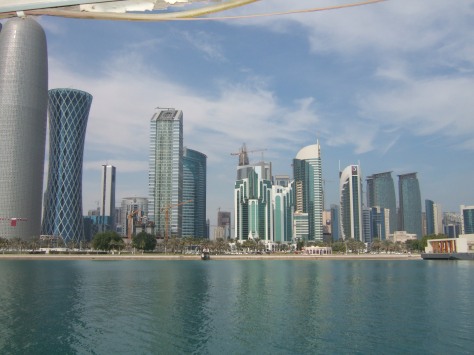 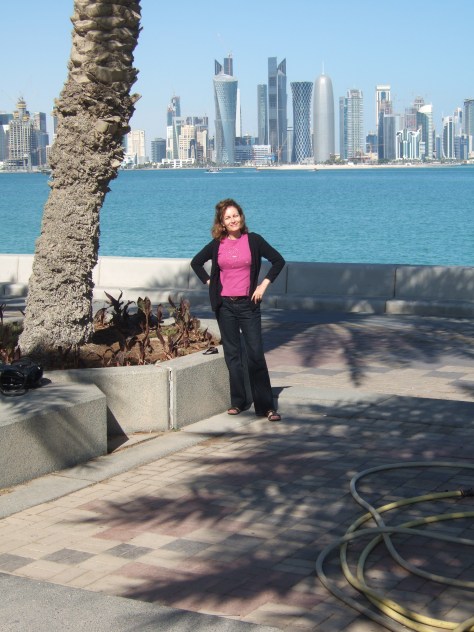 Fast forward five weeks to the end of August, and we are about to board a plane in Washington, DC for our flight back to Qatar.  CNN is reporting on defiance of the curfew in Cairo and Syria’s warning against outside involvement in its conflict on a big screen TV as we sit in an airport restaurant sipping iced tea.  We reminisce about family and friends in America who had inquired about our future safety in Qatar.  “Are you guys going to be okay over there?”, “Isn’t it time you came back to the States?”, “You’ve been in the Middle East how long?”

The Middle East has experienced years, decades, centuries of conflict, but the new rounds of strife across the region were hitting close to home.  As we waited in the Washington Dulles airport gate area, I thought back to bike riding through the streets of the small island town off the Virginia coast, our home of eight years, the sea breezes and salt air fresh in our faces and playing havoc with my curly hair.  The many walks on the protected beaches, Bishara bodysurfing and frolicking in the ocean swells.  And the heartwarming time spent with family and friends was irreplaceable.  In Qatar, and the larger Gulf region, the incautious driving precludes relaxed weekend bike rides, and while “beaching it” or sitting poolside in the winter months is superb, sunbathing in the summer months is synonymous with being trapped in a sauna.  Our ties to the East, though, had Bishara bringing his tablah (Arabic drum) to the Blue Dog restaurant in Snow Hill, MD over the summer where he was hopeful that his drum beats just might synchronize with the World War II music and singing pulsating throughout the intimate surroundings.  To Bishara’s dismay, the opportunity never materialized.

From biking and bodysurfing along the eastern coast, our summer travels brought us to crisp, refreshing mountain air and a most special family reunion in Glacier National Park in Montana.  Bishara and I made it a point to go horseback riding with a bronco-riding cousin, our trek taking us alongside babbling streams and through mountain pastures filled with wildflowers.  As my cousin hopped off his horse to show us a wild anise-type root and explain its medicinal purpose, Bishara, again, brought us thousands of miles eastward, remarking that our horse ride reminded him of riding camels in southern Lebanon as a child with his grandfather in summers past.

As many good memories that we have of the Arab world, from Bishara’s sentimentality surrounding his childhood in Lebanon and Jordan to my blossoming from an introvert to a committed belly dancer and chatter at “women only” fetes in Arab friends’ homes, we have had our share of scares while in the Middle East region.  In 2004, we had to make a quick exit from Saudi Arabia due to bombings of western expatriate compounds in Riyadh, which ultimately prompted our move to Qatar.  And then there are the horrific stories of abuse, and other atrocities, that appear in newspapers and other media, like the recent 8 year-old Yemeni child-bride who tragically died on her wedding night.

When friends and family ask how we can live in an area where this sort of thing happens, I am often left feeling some level of unease, even embarrassment, and at a loss for words.  At these times, I find myself going back to conversations I have had with Bishara and my own conscience.  While my initial interest in living in the Middle East was centered on a singular cultural experience, my years in the Arab world have given way to an enriched life with a healthy balance between work and private time, as well as the opportunity to experience time, and time again, the hospitality and generosity of the average Arab – my friends, my workmates, my community.

I remember quite clearly my consternation over Bishara admonishing me for admiring a Saudi friend’s handbag when we lived in Riyadh, and the friend insisting that I accept the several hundred dollar handbag as a gift.  (It would have been an insult had I not accepted the handbag.)  Or the bedraggled desert Bedouin who needed our help to start his truck, later pressing us to join his family for a camel feast.  And visits to Arab friends’ homes that begin with “Come in, my brother and sister” tend to continue with extended conversation over cardamom coffee and sumptuous meals of lamb and rice.  This magnanimity, based in tradition and religion, first became apparent to me in 1996 when we had a stopover in Lebanon, Bishara’s homeland, during which Bishara’s mother and sister could not feed us enough molkiha, stuffed grape leaves, and kibbe; it was a point of honor and privilege that we be well fed and properly tended to.

It is this focus on the “human factor” and family, known as tribalism in the broader sense, which drew me to the Arab culture and renewed my spirit.  But it is this very concept of strong familial ties, which makes the region rife for disputes and conflict between tribes, sects, and factions when the steadfast sense of loyalty, love and passion that exists within a household leads to a fierce need to protect the reputation and dignity of the family or tribe.

Regardless of the multitude of events occurring in this region, our hearts remain divided between the west and the Arab world.

Why I Love Traveling in the Middle East (Planet Bell: A Travel and Photo Blog by Jeff Bell)

8 comments on “A Heart Divided”