An abundance of fine red sand amid limestone ridges, the land of Lawrence of Arabia’s escapades during the Arab Revolt in the early 1900s, and filming location of the recently released, “The Martian” with Matt Damon, Wadi Rum is a luminous and celebrated desert plain in southern Jordan.

Although a Lebanese native through bloodline, my husband, Bishara, was born and spent his formative years in north Jordan.  We share an enduring love for, and fascination with, Jordan, and have visited family and explored this historically rich country on many occasions.

One of our more inspiring trips to Jordan combined visits to Bishara’s family and childhood friends in conjunction with excursions to Jerash, Madaba (home to mosaic churches), Mount Nebo, Petra, Aqaba, and Wadi Rum.  Our journey to Wadi Rum was our final sightseeing destination within Jordan before our flight home to the Arabian Gulf.  My imaginings of Wadi Rum included a vast sweeping desert landscape, desolate and beguiling, the stuff of epic movies with battles on horseback and political intrigue.

The reality was not so very different.  Following a captivating venture to the ancient Nabatean city of Petra, and a stopover in the Red Sea town of Aqaba on Jordan’s southern border where we enjoyed sheesha and Turkish coffee on the beach, Bishara and I reached Bait Ali Camp, an accommodation fashioned in the Bedouin style, in the Wadi Rum valley.

Drawn to the simplicity of the Bedouin lifestyle and culture, I appreciate the lack of frills, the humble, natural lifestyle, as well as the value placed on unbridled hospitality and generosity.  While in Petra, Bishara and I encountered the ever-present Bedouin, and while some were singularly zealous in selling their wares, the customary undercurrent of altruism, with offerings of tea brewed on aged portable stoves, was indisputable.  Or invitations to visit a nearby family home, as was the case when we met Rose, a 20-something Bedouin who magnanimously invited us to meet her family in nearby Umm Sayhoon village.  The family had virtually nothing, merely concrete walls and floors and not a stitch of furniture to call home, yet they insisted we join them in a feast of lamb and trimmings, which would have required the slaughter of one of their prized sheeps.  We declined, as we were both tired after a long day, and felt we could not appropriately repay this considerable gesture.  We did, however, receive cups of delicious fresh mint tea steeped in a kettle on a portable cooker on the floor.  I was perplexed when Rose’s mother whispered in her daughter’s ear, and Rose disappeared for a few moments into the adjoining room, only to reappear with timeworn Nabatean coins and a hand crafted beaded necklace, which Rose’s mother presented to Bishara and me.  Water welling in my eyes, my visceral reaction was to decline this unsparing expression of generosity.  Her arm outstretched defying my impulsive response, Rose’s mother gently pushed the gifts in our direction.  I could barely blurt out “thank you, shukran, habeeptie.”

Jordanian society operates from an organic essence, the people warm and friendly, the pace slow, and the day-to-day existence transparent and uncluttered with the “heaviness” of life experienced in more affluent and developed countries.  And because it is a relatively small nation, the social connections and affiliations are well-developed and oftentimes quite sturdy.  As we checked into the Bait Ali Camp, our accommodations in the heart of Wadi Rum, Bishara discovered by happenstance that the receptionist, manager of the establishment, was the friend of a Jordanian acquaintance from northern Jordan.  Social ties did not impede the common practice of “drumming up business” experienced at tourist locales throughout the region, especially for  ancillary services, as a youngish male hotel associate and the manager persistently pressed us to take the accommodation’s quad bikes to tour Wadi Rum the following day.  Matching the duos sense of determination, Bishara resolutely countered with our intention to rent a four-wheel drive vehicle with a guide from the nearby visitor’s center in the morning.  Thwarted, the manager made an offhanded remark to the younger man in Arabic.  Bishara leaned in and whispered that the manager informed his staff member he had tried to garner business for the younger man, but we would not budge.

As we drove to our room, following our check-in, the Bedouin lifestyle was palpable in the form of lodging with tents and grotto-like dwellings scattered about the premises.  Initially startled to be confronted with an exceedingly compact stone compartment with a simple wooden front door, I wondered how I would sleep that night.  The interior of our accommodation (“small chalet with fan”) was indubitably austere with twin beds atop wood platforms, one on each side of the room, and nary a couple feet in between.  A similarly meager, although clean and functional restroom, completed the space. 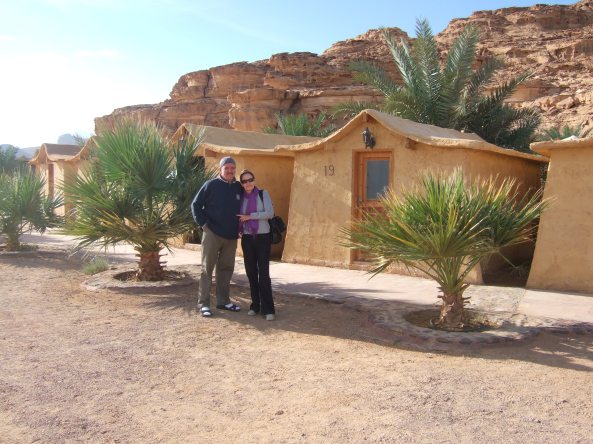 After unpacking and freshening up, Bishara and I headed for the large circular tented dining area, which provided both indoor and outdoor seating.  While most patrons were seated outside the tent at wooden picnic tables presumably enjoying the crisp November evening temperatures, Bishara and I, desert dwellers of the sweltering Arabian Peninsula for quite some years, chose the indoor seating, which better suited our adapted core temperature.  Before being called to the buffet tables, I took advantage of the quiet time, and resumed reading Married to a Bedouin by Marguerite van Geldermalsen, a non-fiction account relating the shared cave-dwelling life (from the early 1970s through the mid-1980s) of New Zealander Marguerite and her Bedouin husband, Ali amidst the relics and rubble of Petra.  A bold voice announcing the buffet was open disrupted my musings surrounding Marguerite and her remarkable spirit and life, and found me and Bishara queuing up with other guests to partake in a lavish dinner of mezzah-type selections, including olive oil laden hommous, tabouli, fattoush, labneh, and mounds of chicken and rice.

Ambling back to our room after dinner, an attentive receptionist inquired if we would like to accompany him on a short trek to view the stars of the desert sky; we declined maintaining we were tuckered out after trudging through wondrous Petra the day before, although we were fairly certain the stroll would not be complimentary.  Arriving at our room, we asked for additional blankets and pillows to mitigate the raw nighttime air, as heaters were not part of this unpretentious domain, and in short order I was in a deep slumber swaddled in cozy quilted coverings.  We awoke to the morning light squinting through our curtained window, and I remarked to Bishara that I had the soundest most peaceful sleep I could remember.

Following an al fresco breakfast of babaganoush, hommous, olives, labneh, za’atar (thyme soaked in olive oil), magdoose (pickled eggplant), goat cheese, fried eggs, pita bread, and freshly brewed coffee in an Arab styled gazebo, we mounted the stairs alongside the reception building and a nearby sandstone dome, makeshift viewing points, to survey the Bait Ali Camp grounds and limitless maroon sand drifts and august granite forms.  We traversed the various majless layouts on the property, accepted cumin tea from the manager for Bishara’s slightly unsettled stomach, and received a request to join a sheesha and sweet mint tea respite at the Camp later in the afternoon, before departing for the Wadi Rum Visitor’s Center. 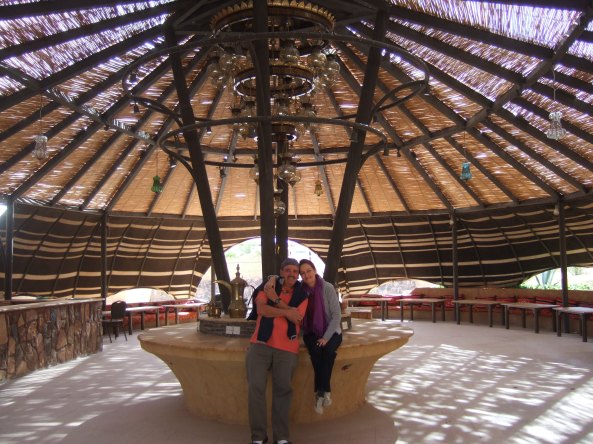 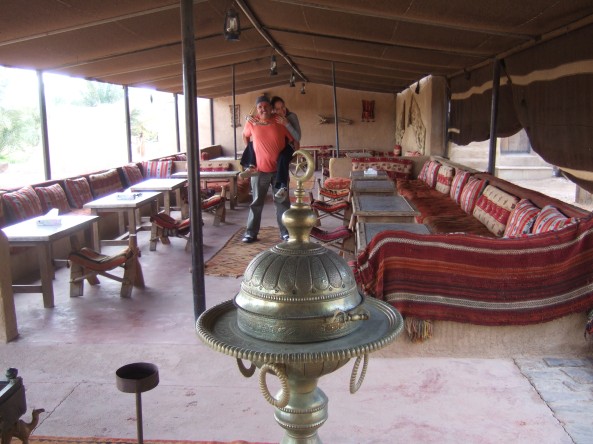 The area encompassing the Visitor’s Center flaunted a chaotic scene; Bedouins in street clothes or worn thobes and ghuttras haphazardly wrapped around heads, all scuttling about, competing to make the sale – to drive anticipative vacationers through the Wadi Rum basin.  We even encountered a shop owner claiming that her brother could drive us through the UNESCO protected area.

We serendipitously located the Visitor’s Center and ticket office, as we sought to avoid the clusters of solicitors.  Selecting the one hour tour, which could be extended to two, with a driver and four wheel drive vehicle, the slight man decked out in a fitted brown leisure suit stationed behind the ticket counter provided us with a map along with instructions on meeting our driver in the tiny town of Wadi Rum.  We began our Saharan expedition thankful we hired a closed truck, as many of the conveyances rambling along the maroon sands had open air backseats filled with patrons protected by facemasks.

Perched on metal bench seats opposite each other in the back of the truck, we sailed along the flaming coral sea of sand peppered with stately sandstone shapes before stopping at a Nabataean temple where our guide provided a brief synopsis on the origins and likely function of the sanctuary in ancient times.  We advanced along the boundless serene rose lake, tourists on camelback and brown Bedouin tents dabbing the horizon, until we reached spots with particularly exquisite panoramic vistas where we would stop, and ingest the precious scenery, sensing a singular connection with the creation of this incredible valley through the effects of rainwater and sand storms some 500 million years ago.  Further into the plain, we ascended soft sand dunes and solid granite abutments only to be greeted by more extraordinary settings, and were ceremoniously invited to traditional mint tea in a red carpeted Bedouin majless. 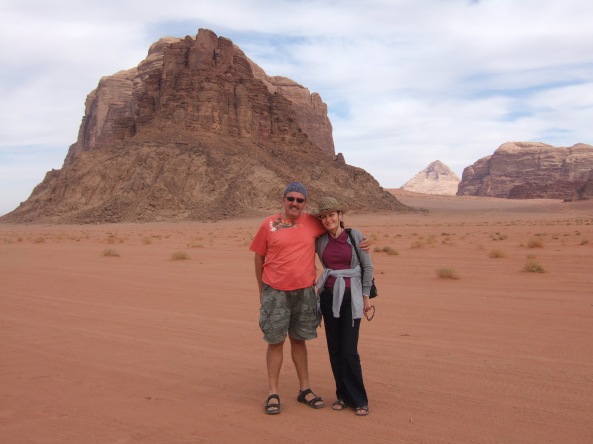 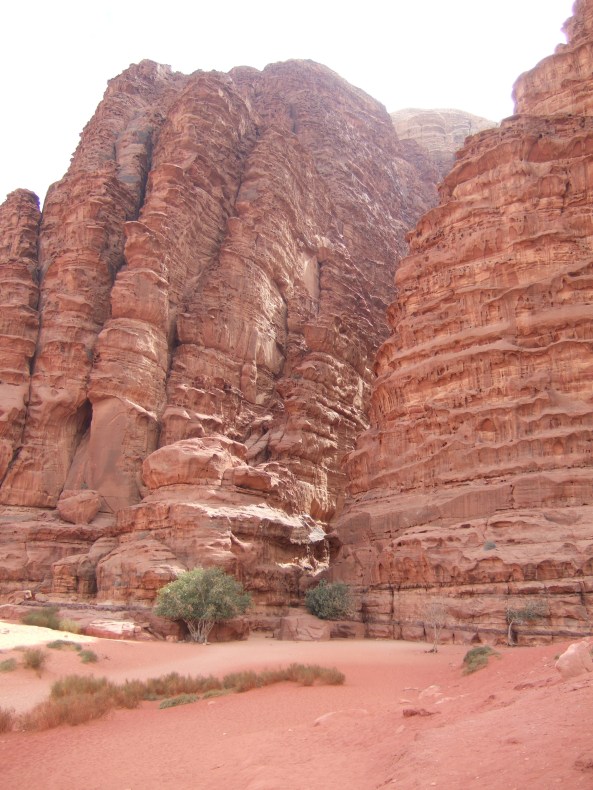 We wished we had allotted more time for Wadi Rum, however, found it imperative to travel to northern Jordan to visit Bishara’s childhood friends and family before returning to the Arab Gulf.  Our four hour drive along the length of Jordan was filled with reflections of our awe-inspiring adventure in Wadi Rum and Bishara’s nostalgic recollections of his former life in Jordan, all accompanied to the music of Fares Karam.